“Fight for the things that you care about, but do it in a way that will lead others to join you.” 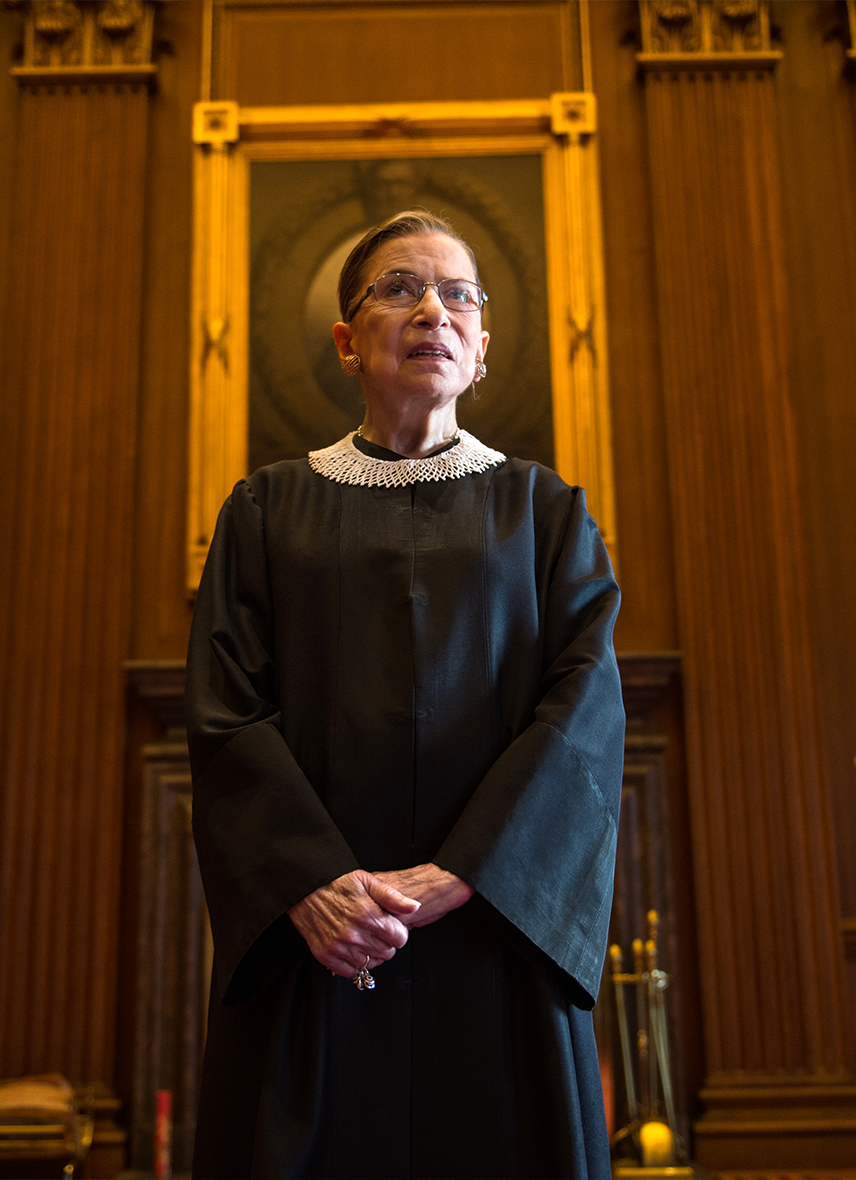 Ruth Bader Ginsburg was a professor, lawyer, and jurist of historic stature. The contributors to this memorial volume speak to the multiple stages of her legal career, including her four decades on the federal bench with twenty-seven years on the Supreme Court. She is among the few Justices in the history of the Court who had a pathmarking impact on the law even before becoming a judge and among the even fewer still who will be remembered long beyond their service. Ruth enriched the lives of all who knew her, worked alongside her, or simply were inspired by her example. She was proud of her many associations with Columbia Law School, and it is fitting that this tribute collection appears in the Columbia Law Review, a publication to which she contributed as both editor and author.

As a jurist, Ruth was a master of the judicial craft. Her opinions are written with the unaffected grace of precision. She chose her words with calibrated nuance to convey exact intended meaning. But she also worked quickly, even on hard assignments. She enjoyed the challenge of routinely being first to complete an assigned opinion each Term, undaunted by the possibility that a Chief Justice might send difficult cases her way to enable others to keep pace.

In conference, Justice Ginsburg embodied integrity, intelligence, and responsibility. She listened attentively and spoke softly, contributing quiet rigor and conviction to each conversation. Those contributions continued through the opinion circulation process. She offered edits to improve the work of others and accepted suggestions to strengthen her own. Her many majority, concurring, and dissenting opinions constitute an impressive legacy. And every Justice who shared the bench with her produced better work for being by her side.

Ruth not only brought judicial talent and temperament to the Court; she also brought her passion for the arts. She was world famous for her love and knowledge of opera. She served as our impresaria of the Supreme Court Musicale, a tradition of bringing the Justices and Court family together twice a year for music at the Supreme Court. She attracted world-class talent that lifted our spirits during our most arduous workdays.

Justice Ginsburg has of course become an international icon of the law. In her long life, she traveled the globe making common cause with judges, lawyers, and law students, building friendships based on a shared belief in the power of the law to help people live free. She inspired a great many individuals, and especially a great many women, to dedicate themselves to law and to public service. Her influence will continue through their work.

Beyond all this, Ruth was devoted to her delightful family. She demonstrated that one can indeed balance a demanding professional career with a rich home life. We at the Court were third-party beneficiaries of her marriage with Martin Ginsburg, who enlivened our gatherings during his too-short life. Their children, Jane and James, will always be welcome at the Court.

I am fortunate to be among those who knew Justice Ginsburg as a colleague and a friend. She will remain an enduring model for so many others who know her through her work and example. The collected tributes that follow will help ensure that future generations will know Ruth Bader Ginsburg too, as a tireless, resolute, and beloved champion of justice.

* Chief Justice of the United States.

Joan Ruth Bader is born on March 15 to Nathan and Cecelia Bader. She is raised in Flatbush, Brooklyn.

Ginsburg enrolls at Harvard Law School, one of only nine women in a class of over five hundred men.

Justice Ginsburg was a Titan. During her forty years of public service, and really her entire legal career, she lived by Deuteronomy’s teaching—“Justice, Justice thou shalt pursue.”

Ginsburg graduates first in her class at Columbia Law School. She clerks for Judge Edmund L. Palmieri of the U.S.District Court for the Southern District of New York from 1959 to 1961.

Like her Notorious dissents, her decisions in civil procedure and jurisdiction cases share a pragmatic focus on law on the ground and a commitment to judicial modesty. But they stand out for their attentiveness to doctrinal and institutional interstices over abstract principle.

In Reed v. Reed, 404 U.S. 71 (1971), the Supreme Court applies heightened scrutiny to differential treatment based on gender for the first time. Ginsburg authors the brief for Sally Reed.

Along with Brenda Feigen, Ginsburg co-founds the Women’s Rights Project at the American Civil Liberties Union.

RBG possessed the courage to make controversial arguments, knowing that she would face stiff headwinds. A singularly gifted lawyer, she won the day with eloquence, meticulousness, and a tireless work ethic.

Together with her husband Marty, Ginsburg represents Charles Mortiz in Moritz v. Commissioner, 469 F.2d 466 (1972), in which the 10th Circuit holds that a tax deduction available to unmarried women but not unmarried men is unconstitutional. This is the only case Ruth and Marty brought together, and it is featured in the 2018 film On the Basis of Sex.

* Dean Emeritus and Harvey R. Miller Professor of Law and Economics, Columbia Law School. The author clerked for RBG in the October 1994 Term, her second year on the U.S. Supreme Court.

Ginsburg successfully appears before the Supreme Court for the first time in Frontiero v. Richardson, 411 U.S. 677 (1973), in which the Court holds unconstitutional a military benefit afforded to men with dependent spouses, but not women.

She approached life and work with these words: “We the people.” She believed in and fought for “justice for all.” She succeeded to a great extent.

In Weinberger v. Wiesenfeld, 420 U.S. 636 (1975), Ginsburg successfully argues before the Court that the Social Security Act’s gender-based distinction in survivor benefits is unconstitutional.

Ginsburg is appointed by President Jimmy Carter to the U.S. Court of Appeals for the District of Columbia Circuit.

Ginsburg is appointed by President Bill Clinton to the U.S. Supreme Court.

* Former U.S. Senator from New York, U.S. Secretary of State, and Democratic nominee for President in 2016.

Scholars will have the final—and probably best—take on the Justice’s legal theory, but here is mine: The Justice loved the United States.

Ginsburg authors the majority opinion in United States v. Virginia, 518 U.S. 515 (1996), in which the Court holds that Virginia Military Institute’s exclusion of female cadets is unconstitutional.

* Supreme Court and appellate partner in the Washington, D.C., office of Munger, Tolles & Olson LLP. From 2009 to 2016, she served in the Office of the Solicitor General.

With Justice Ginsburg, there is so much more than meets the eye.

In Shelby County v. Holder, 570 U.S. 529 (2013), the Court holds that the Voting Rights Act provision requiring federal preclearance before changes to voting laws and practices is unconstitutional. Ginsburg authors a dissenting opinion, arguing that “[t]hrowing out preclearance when it has worked and is continuing to work to stop discriminatory changes is like throwing away your umbrella in a rainstorm because you are not getting wet.” 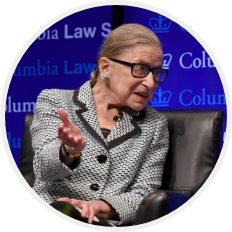 This year marks the 25th anniversary of Ginsburg’s investiture to the U.S. Supreme Court. RBG, a documentary film about Ginsburg’s life and career, is released.

* Then–Chief Judge, and now a Senior Circuit Judge, of the U.S. Court of Appeals for the Second Circuit gave these remarks at a Columbia Law School event celebrating the twenty-fifth anniversary of Justice Ginsburg’s investiture to the Supreme Court.

As she said on another occasion, “Fight for the things that you care about, but do it in a way that will lead others to join you.” She never attacked people, but rather ideas, and she did so in a measured, careful way designed to bring others along. This was a huge factor in the many and great successes she achieved both as an advocate and jurist.

Ginsburg’s impact and legacy are explored in Justice, Justice Thou Shalt Pursue: A Life’s Work Fighting for a More Perfect Union, written by Ginsburg together with Professor Amanda L. Tyler.

Shortly after I learned of Ruth’s passing, I thought: A great Justice, a woman of valor, a rock of righteousness, and my good, good friend.

Ruth will be remembered as a brilliant judge, and a great jurist who did much for women (indeed for everyone) both before and after she became a Justice. Ruth was intelligent, logical, and hardworking. Her opinions reflect her principles. When I wanted to know what she was thinking—and I always wanted to know what she was thinking—I would read her memos and her drafts. Her analysis of a case would be clear, true to the record, and true to the parties’ arguments. She would explain the law succinctly, but without omitting necessary detail. As a Justice, her opinions reflected her basic decency. She understood the basic indecency of discrimination and unfair treatment. She correctly assumed that the law seeks to help people live better lives.

Ruth was a woman who made the world a better place for us to live in, in ways both big and small. She paid attention to all the details. That included her clothes. She dressed well. She loved the ruffs she wore with her robes on the bench. She paid attention to the details of human relations. A few weeks before she died, she sent my newly born grandchild a t-shirt with the words, “Future RBG Law Clerk.” Her note said: “This is too large for you. It’s going to have to be for Ryan” (his older half-brother) “until you get big enough to fill it.” She was a thoughtful person.

Ruth understood that not every silence needs to be filled. She would think before she spoke, even on social occasions. But she did have a good sense of humor. Over the years, I might go into her office to tell her something I had found funny, and say, “Ruth, what do you think of this?” And she would find it funny. We would chat about it—as long as I did not stay too long. If I stayed too long, she would stand up from behind her desk. I knew exactly what that meant: She wanted to get back to work, and that’s what she did.

Ruth was a rock. When I came back to D.C. for her service and went into my office, I found a card she had sent on my birthday a few weeks prior. The card had a picture of her, and it said, “I order you to have a happy birthday. To my younger colleague, stay cool and well.” And she underlined younger, which she always thought was terribly funny—and I liked it too! She wrote, “We’ll get together when this epidemic is over, and see an opera, and life will go on.” Even now, thinking about that cheers me up.

What was it like to work with Ruth? Interesting. Challenging. Educational. The longer you knew her the more you liked her. And I did know her many years. And I did like her very much.

I shall miss Ruth very much indeed.